After getting married, my mother-in-law picked us up from the airport and when we arrived at her house late at night with rumbling tummies, gave us some of this soup for us to eat.  I completely fell in love with this soup and she verbally gave me the ‘recipe’.  It became THE soup to expect when my husband would return home from a business trip and whenever I would leave him alone at home while I went to visit my family with the kids.  (THE soup and lasagna would sustain him for a few days)  Poor him.  ha.

It’s a really soothing, delicious soup and healthy at that.  Just eat it with some rice or bread and you’ve got you and your family a healthy and great-tasting meal.  This recipe makes a large pot of soup so it’s great if you have a hippo for a husband who drinks soup by the gallon.  😉  Gotta love my hubby.
Ginger Tomato Beef Soup
printable recipe
Ingredients
1 ½ lbs beef shank (or beef stew meat*)
1 ½- 2 inches fresh ginger, peeled and sliced
4-5 carrots, peeled and chopped
5-6 celery stalks, chopped
½ head of cabbage, chopped
1 qt chicken stock
1 qt creamy tomato soup (Trader Joe’s tastes best)
Salt and pepper
Tabasco(optional, gives it a really nice kick)
*if you use beef stew beef, then the soup base may be a little less hearty, and can substitute half of the chicken stock for beef broth 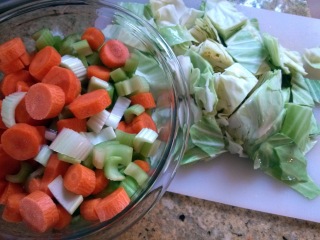 prep all your veggies by washing, peeling, and chopping

That’s about how much ginger I use.  Peel and slice. 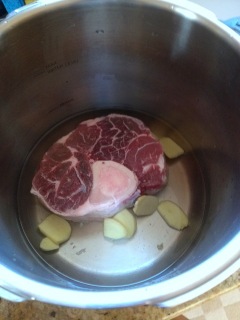 Add the beef and sliced ginger to a pressure cooker pot and add water just until the meat is almost submerged.

Lock the pressure cooker lid and heat on high until it comes to a boil, then boil for about 30 mins on med-low heat.  Turn off the heat and allow it to cool and release all the steam.

You can skim off some of the fat/oil floating on the surface.  Once the steam is released and you are able to unlock the pot, remove the beef and cut it up into small cubes, trimming away and tossing the fat and the small bone in the middle.  Strain the liquid through a strainer, toss the ginger, and transfer the beef and the strained liquid to another large pot.

Add the chicken stock, creamy tomato soup, and all the vegetables and bring to a boil, skimming the foam that rises.  Boil until the vegetables are soft then season with salt and black pepper.

That’s IT!  Serve with some Tabasco, if you dare 😉

The Fairy Kitchen
Cooking with a Wallflower
Gingermelon