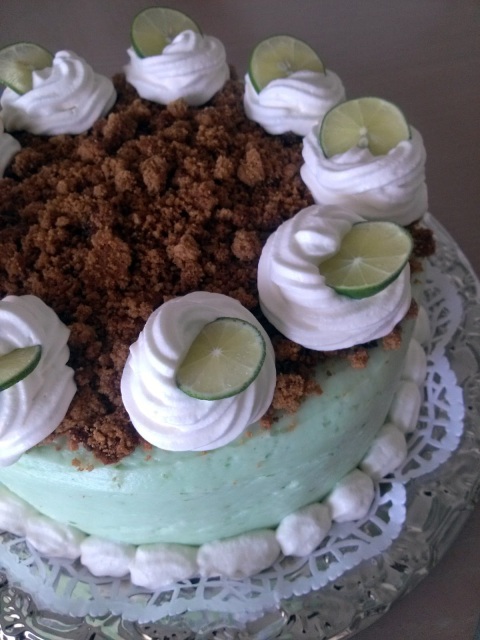 I’m definitely blessed to be living in California where we are currently enjoying sunny, fairly warm weather in the high 60’s almost 70’s and it’s the middle of winter.  Whereas those living in the east coast will be cursing their California relatives while they blunder about mummified in a twist of coats, scarves and hats.  So please forgive me for conjuring up thoughts of fresh, cool bananas and key lime pies.  Actually, you can blame my husband for injecting my mind with such criminal thoughts in the middle of winter.  He would then turn around and point his finger at me since I was the one who asked him what kind of cake he wanted for his birthday coming up this Superbowl Sunday!  He’s turning the big 3-0 and too bad we don’t have the budget presently for a big birthday/Superbowl party for him.  Maybe we’ll do one for him next year.

I’m always excited when we have a birthday coming up because I know I have an excuse for those butter-laden hunks of goodness glopped with generous amounts of BUTTERcream.   Any other time, I try to be more health conscious by baking with margarine or oil and sneaking in blended chickpeas into my kids’ chocolate chip cookies.  None of that in this green beauty!

So if you haven’t already guessed, he said he would like either a banana cream pie, a key lime pie, or a Black Forest Cake.  I’ve already made Black Forest cakes for his birthday before (twice, from scratch without any of those yucky maraschino cherries) and I remembered saving a recipe for key lime buttercream and a banana lime cake that I thought he wouldn’t mind if I changed up his request a bit and made it into a cake instead of a pie.  Besides, who has pie for a birthday cake??? OK, maybe some people do.  But he’s getting the better end of the deal with me including both the banana and the lime (and we can’t forget the cream) into the cake here!

The recipes are from here and here
I changed it up a bit and made it into a cake, instead of cupcakes and instead of the shortening/butter buttercream recipe they used, I just added the lime zest and lime juice to a swiss meringue buttercream recipe instead.  I’m not a huge fan of those butter and powdered sugar-type frostings… they taste too sweet and are quite unpalatable for me.  I do make them when I don’t feel like whipping a meringue and boiling the sugar syrup, my favorite is the Sprinkles Cupcakes strawberry buttercream recipe revealed by Martha Stewart.  I just prefer the taste of Swiss buttercream, but we digress.

Banana-lime cake layered with sliced bananas and whipped cream, frosted on the outside with Key Lime Buttercream frosting, topped with crumbled graham cracker pie-crust, with dollops of more whipped cream and decorated with slices of lime.  Can you say YUMMMMMM~

There’s a whole lot of steps to make this cake, so feel free to make the buttercream ahead of time and refrigerate it, then just bring it back to room temperature and beat it on your mixer with a paddle attachment and it’ll be good as new.  Bake the cake (you could bake it a day before and refrigerate it), make the graham cracker crumble and whip the cream on the same day you will use it.

After the cake is cool, I like to cut off about a 1/2″ crust from around the cake so that you don’t have the crunchy/hard part in you cake.  But that is optional.

I then use a bread knife to cut off the top so that we get a flat surface to work with when we stack the cakes.   No sliding cakes from Sleeping Beauty here.

It doesn’t have to be perfect, I just eyeball it.

I like to make a dam before I fill layered cakes with whipped cream, especially with a denser cake like banana cake.  You pipe the lime buttercream close to the edge, all around the cake.  Then you fill it with the whipped cream and bananas and a little more whipped cream.  That way when you stack the other cake layer on top, the weight of that cake won’t completely squeeze the whipped cream out the sides.  (Since whipped cream is so light compared to buttercream)

There’s a nice looking pre-dressed cake that looks more like a mint patty hamburger than a cake. 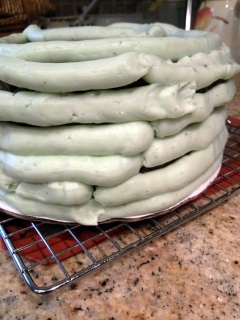 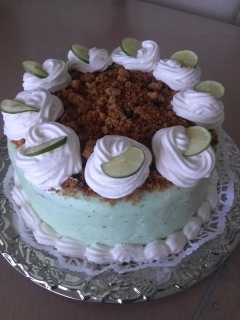 Next you add the crumbled graham cracker pie-crust all over the top of the cake, make pretty swirls with your whipped cream, and decorate with sliced key lime.

It was a big hit!  Really good cake!  Sweet banana cake with the perfect balance of key lime tartness topped off with light whipped cream and crunchy piecrust!  SOOO good!

Here are the recipes:

P.S.  When you are whipping the butter into the meringue mixture, don’t panic when it starts to look like cottage cheese!  Don’t throw it out either!  Just keep mixing for a few mins or more and it’ll come back together.  Cover the mixer with a towel so you don’t spray your kitchen (or yourself) with frosting.

Whipped Cream
1 cup heavy whipping cream
2 T sugar
1/2 tsp vanilla extract
Add sugar to the cream and whip with whisk attachment on stand mixer until soft peaks form then whisk by hand (with a whisk, not your hand silly) until you get stiff peaks.

Graham Cracker Crumble
1 cup graham cracker crumbs
1/4 cup melted butter
2 T sugar
spread over a baking sheet and bake at 400 F for about 8-10 mins. We are using it as a crumble decoration/topping and not a piecrust so you don’t need to press down.

Other
1-2 bananas (sliced, for cake filling)
thin sliced key limes for decoration (about 4)

Click here for printable recipe (Recipes only, no step-by-step pictures for putting the cake together)

The Fairy Kitchen
Cooking with a Wallflower
Gingermelon Dolls

Whipping Up a Sweet + Styley Life